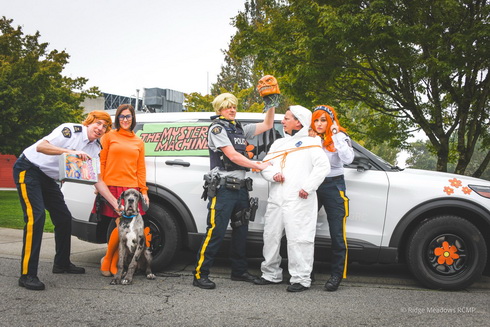 In early October, Ridge Meadows RCMP, with the assistance of MR Mystery Inc, began investigating multiple reports of pumpkins mysteriously disappearing from doorsteps all over the City.

On October 28, 2022, the Mystery Team, led by Fred Rodgers, Velma Dinkley, Shaggy Rogers and Daphne Blake, received a tip that there might be a connection to a large pumpkin pie facility on a rural property located in East Maple Ridge.

The Mystery Team was able to unmask the possessed pumpkin patch pilferer’s ominous plot before it was too late. The masked henchmen was none other than Mr. Peter Pumpkin himself. It turns out that he was mad at local-pumpkin-farmers for their pumpkins having too many seeds and undercutting his pumpkin pie profits.

Mr. Pumpkin will be remanded until his court date of November 1, 2022.

Ridge Meadows RCMP wishes everyone a safe and Happy Halloween.