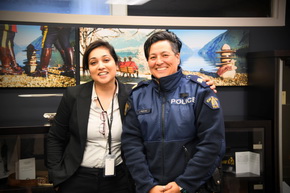 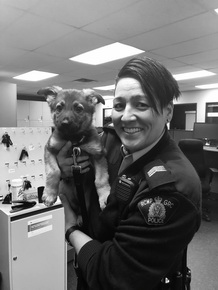 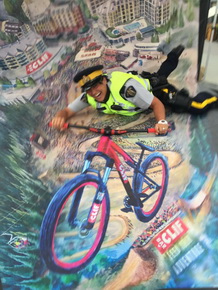 I am a proud survivor of being a police officer for 25 years and I have done it on my terms, being true to who I am, which also happens to include being gay. I do not use the term survivor in a derogatory manner. It’s just, when you’ve been in a career for 25 years, any career, there are moments which test your resolve.

I’m currently the Watch Commander of "C" Watch at Ridge Meadows detachment. It is my sixth transfer in 25 years and I came here from being the Squamish Detachment commander. Personally, I have always made it a rule to transfer every 3-4 years. For me, it allows for the new challenges and moments of growth I seek…and when I’m growing, I’m happy.

Growing up in Pender Harbour on Canada’s famous "Sunshine Coast", I was surrounded by love and support. It was that classic small town feel which you might see in a CBC family TV series. But, growing up in this idyllic situation did not mean I was not exposed to some of the more difficult principles in life.

My family is mixed as my mother is Japanese and my father is Caucasian. We only had two sets of half Japanese kids in our school of 150 students. We were minorities and it is here where I had my first encounter with, what I now know now is, discrimination. I was mistaken many times for being aboriginal (which to me was never a problem) but I was curious why people judged me and others by their appearance. I recall a moment shopping with my mother when I was 5 and my brother was 6. We were being followed by staff in a toy store and my mother had to explain to me that the staff were likely concerned we were going to steal. This incident, this exposure to judgment, would leave a lasting impression on me because from a young age, I knew that I felt different than others.

I started in the RCMP quite young. I was 21 when I was accepted and travelled to Depot Division in Regina for my training. When I was preparing to leave for Regina, a coach and mentor who knew of my sexual orientation, said to me, "Don’t tell anyone, they don’t need to know. Just focus on your training and you’ll get through it." She had previously confided in me that she was a lesbian and I knew she had been discriminated against and assaulted numerous times as a result of homophobia. Still, I was shocked at the advice she gave me.

I went to Regina and this advice lasted exactly one week. I decided that, if I was going to be successful here, and in my career, I had to be authentic and true to myself. I pulled my troop of 23 together and explained who I was. I assured them that if they had any questions or problems with it then I am open to speaking about it. I also stated that I expected them to judge me on the work I did and not my sexual orientation.

We have to remember that this was 1997. I look back now and think, that could have been such an error on my part. But it ended up being the best decision I ever made. From that moment on, I have always been true to myself. I also believed that I didn’t need to flaunt it as I was very aware that homophobia was still quite omnipresent. But I just didn’t have a need to make a point for the sake of making a point.

Over the course of my career, I have heard stories that aren’t the same as mine. This is unfortunate. But my perception is that I have never experienced discrimination from the RCMP based on my sexual orientation. This is my philosophy and doesn’t have to be yours.

Has it been all sunshine and puppy dogs? Absolutely not! But, it is because of my philosophy about people judging my work and not what I am, that allowed me to work hard, make good impressions and a good name for myself as I dedicated my career to helping communities and the members I work with. And it’s exposed me to opportunities to share my truth which I likely would not have in another career.

I have taken part in the "It gets better" video supporting students and youth in the community who struggle with their sexual orientation. In 2017, I was asked to be a guest speaker at the 4th Global Human Rights Conference on the topic about being gay and a member of the RCMP. Being an instructor of the Tactical Troop, being a media relations officer, and as the Watch Commander I, very fortunately, can share and promote my story.

The point I’m trying to make is this, as an LGBTQ2S+ person…we can survive. We can thrive. We can have long prosperous careers and lives.

Go live your truth…. whatever that may be.