Take a "gander" at our new Inspector

Maple Ridge, B.C - Ridge Meadows RCMP is thrilled to announce we get to keep Inspector Adam Gander and that he is now promoted to the senior leadership team here at the Ridge Meadows detachment. 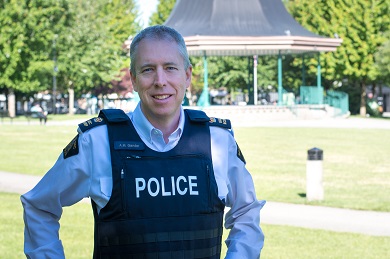 Inspector Gander made his first appearance to the Ridge Meadows detachment in 2001, where he began his career and first posting as a Constable from his training at Depot. Inspector Gander worked in Ridge Meadows for 12 years in various sections including front line policing, school liaison officer at Garibaldi Secondary School, General investigational services (GIS) and finally as a supervisor to Frontline officers.

In 2013 he left the detachment to continue his career joining the Integrated Homicide Investigative Team (IHIT) where he became an accredited Team Commander.

Inspector Gander returned to the Ridge Meadows detachment in the fall of 2019 as a Watch Commander overseeing the frontline officers and taking on the role as the Plain Clothes commander. In May of 2021 he was promoted to Inspector.

Inspector Gander states, I have lived in Maple Ridge with my family for 20 years and it’s actually really exciting to be able to continue my career in my home town serving the citizens of Maple Ridge and Pitt Meadows.