Stolen bike returned better than before 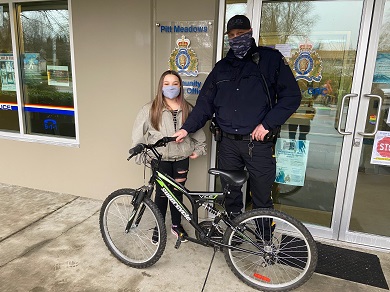 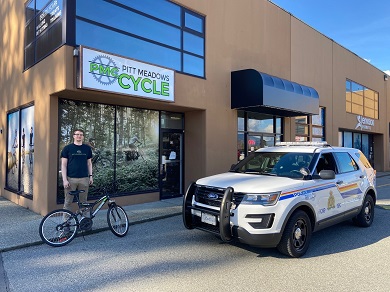 On Wednesday, February 17, 2021, Frontline police officers working in Pitt Meadows were made aware of social media posts indicating a girl’s bike had been very recently stolen however, no policereport had been officially made. Corporal Mike McKinlay went in search of the bike and, while working in parallel with Pitt Meadows Bylaws department, found the bike. Unfortunately the bike was located abandoned, partially disassembled and in need of repair.

The bike was brought back to the Pitt Meadows Community Police Office where all members working that day took turns to put the bike back together however, not having access to proper bike repairtools, they were unable to get the bike working to their satisfaction. A call for assistance was placed to local bike shop, Pitt Meadows Cycle, who responded by asking the members to bring the bike in and they would give it the TLC and tune up it needed atno charge.

On Thursday, February 18, the bike was returned to the rightful owner, a very happy 11 year-old girl who, upon getting her bike back, exclaimed the bike never felt this good.

What a great outcome to this story with a good reminder to take photos and record serial numbers of your belongings states Sergeant Michelle Luca. Because this family was able to accuratelyidentify the bike we were able to return it to it’s rightful owner. We also would like to thank Pitt Meadows Cycle for their community spirit in helping with this positive outcome.

Luca further states, Social media can be a great tool for getting a message out but police cannot perform an investigation via social media. Please report all stolen items to the non-emergencyline or use our online reporting tool.